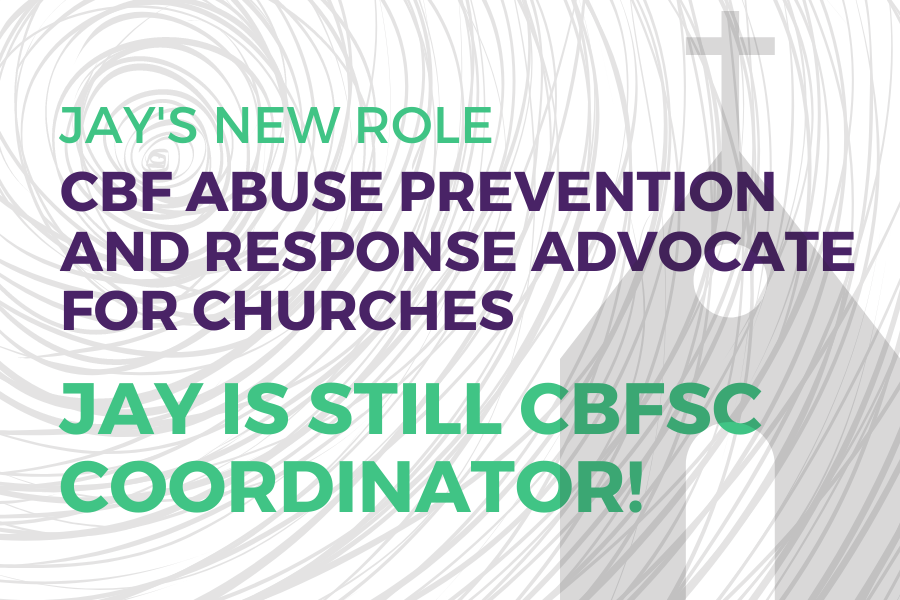 To continue its commitment to preventing abuse in congregations and advocating for abuse survivors, the Cooperative Baptist Fellowship has named CBF South Carolina Coordinator Jay Kieve to serve in the newly-created position of CBF Abuse Prevention and Response Advocate.

Jay is NOT leaving CBFSC. He is taking on this added responsibility because of his long-time interest in abuse prevention.

In this part-time role, Jay will be the Fellowship’s point person for connecting churches to resources for the prevention of clergy sexual abuse and clergy sexual misconduct, and will work alongside the Clergy Sexual Misconduct Task Force and CBF-partner GRACE (Godly Response to Abuse in the Christian Environment). He will also support congregations seeking prevention training, developing abuse prevention policies and establishing a culture that protects children and vulnerable adults from abuse.

Jay will be available to support survivors of clergy sexual abuse, including receiving allegations and recommending church response.

Jay is one of the founding members of the Clergy Sexual Misconduct Task Force launched five years ago jointly by CBF and Baptist Women in Ministry. During his leadership of CBFSC, he met Cooperative Baptists working in sexual trauma services centers, who he credits with helping him to see and understand the impact of abuse on children, families and communities.

Jay said that relationships with these colleagues as well as his work with the task force inspired him to pursue learning related to the prevention of abuse in church settings. Over the past five years, he has participated in many prevention and response trainings, become a facilitator for the “Stewards of Children” prevention curriculum and has given multiple presentations at professional abuse prevention conferences. He is also a certified trauma professional and will soon be a GRACE-certified safeguarding specialist.

CBF Executive Coordinator Paul Baxley expressed his gratefulness to Kieve for taking on this new role and noted his extensive experience as an advocate on behalf of abuse survivors.

“Jay Kieve has already provided significant leadership across our Fellowship in preparing congregations to develop policies and practices that prevent the devastating experience of sexual misconduct, and he is already a compelling advocate for those who have been abused,” Baxley said. “I am grateful that he will take formal leadership of our ongoing work in this area while continuing to give exceptional leadership to CBF South Carolina. The calling to advocate for those who are abused and develop preventative practices in congregations requires persistent faithfulness. Jay’s new leadership role is the next step in our Fellowship’s response to that calling.”

Jay said he is honored to serve the Fellowship as CBF Abuse Prevention and Response Advocate.

“I am so proud that the Cooperative Baptist Fellowship prioritizes the protection of children and vulnerable adults enough to create a staff position supporting churches,” he said. “Jesus issued very harsh warnings to people who harm children (Matt. 18:1-14) so churches need to be conscientious in our care and protection of them. I am honored and humbled to be able to serve in this capacity.” 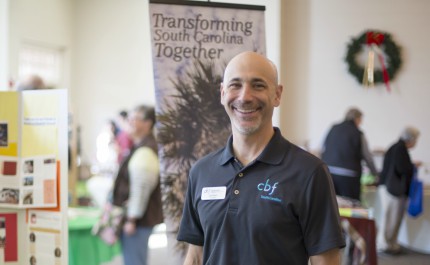 Jay on why/how he got this role

I’m very grateful that our CBFSC Administrative Council blessed adding this CBF role to my work.

The reality that our Personnel Committee and Administrative Council recognized is that I’ve been doing a lot of abuse prevention work over the past few years already.

In the past four years, I’ve worked closely with CBFSC churches to adopt great policies and pursue training related to clergy sexual misconduct and the protection of children in our care.

As I did more work among our churches, coordinators in other states recommended their churches to me because of my experience and passion.

I’m very grateful that CBF, by calling me to this newly created role, recognized my passion and connected it in an official way to the broader Fellowship.

A graduate of Duke Divinity School (M.Div. and Th.M. and Baptist Theological Seminary at Richmond (D.Min.), Jay has served as CBFSC coordinator for the past eight years.

In 2017, CBFSC was named community partner of the year by Sexual Trauma Services of the Midlands for its work to conduct clergy training.

Jay and Melanie have been married for 30 years and have two adult children.